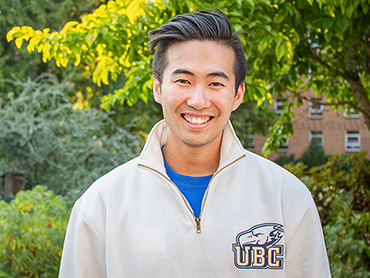 So nice, he did it twice.

Simon returned for a second year as a student monitor with UBC Future Global Leaders in 2019. “I realized what a nice job it is so I wanted to come back a second year,” he says.

Now in his fourth year of kinesiology at UBC, Simon has discovered that the role of a live-in monitor goes well beyond the job description. “Some of the students become friends. Saying goodbye is hard, but that’s a good thing. Because it means that I had an impact on their life.”

Some of the friendships he has made have lasted beyond the summer. Says Simon, “The relationships we form at UBC Future Global Leaders can last a lifetime. I get to see how far some of the students I monitored last year have come, and knowing I played a part in that is very rewarding.

I can definitely say that after meeting all of these high school students that the future is bright!”

Best memory of FGL 2019: “That’s a really hard question to answer. My entire six weeks at UBC Future Global Leaders was like one big highlight reel. Something meaningful happened every day.”

We have detected that you are using an older version of Internet Explorer. While we have made every effort to accommodate all users, portions of our website may not display or function properly with your current browser. We suggest you upgrade to another browser such as IE10+, Chrome, or Firefox.